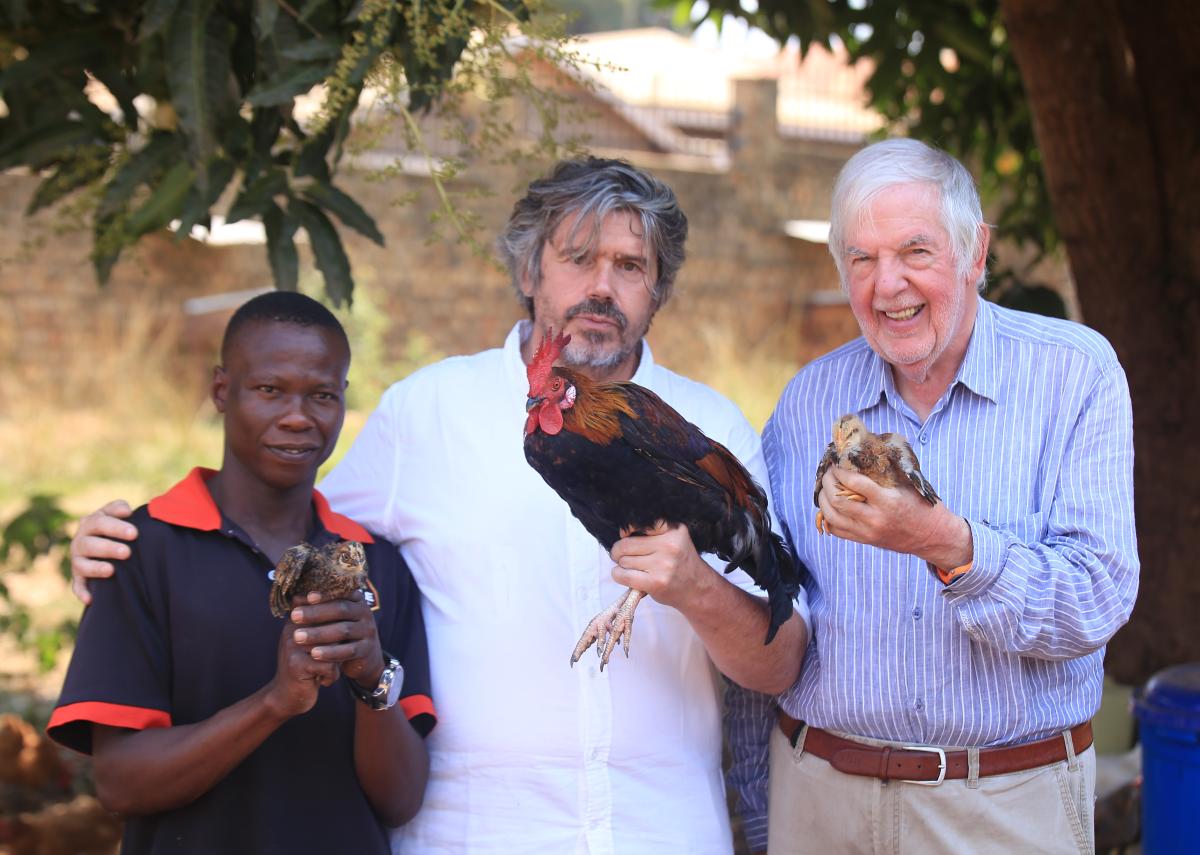 Artist Koen Vanmechelen and ViaVia Joker Travellers Cafés join forces in Entebbe. The initiative follows Vanmechelen’s visit to Uganda last summer on invitation of the ViaVia. The artist was so enchanted by the region’s beauty and the contact with the local people that he decided to team up with the ViaVia in Entebbe for an ambitious art-community-science project.

Together they will build one of the artist’s giant Cosmogolem statues and introduce sustainable chickens to local households through Vanmechelen’s Planetary Community Chicken Project. The project aims to address global challenges to sustainable food systems through diversity and activate the power of creativity as motor for development.

With this collaboration, we combine art, food, and children rights for a more just and sustainable world.

The CosmoGolem project focuses on the empowerment of children and their rights all over the world. The CosmoGolem is a wooden giant, a huge anthropoid wooden sculpture created by the artist when he was 18 years old. Four metres high, the Cosmogolem strives to be a symbol of hope and evolution throughout the world. So far, over 45 CosmoGolems have been built around the globe.

In cooperation with ViaVia, the CosmoGolem family is expanding to Entebbe soon!

The CosmoGolem shows children that they can express themselves through poetry, stories, dance and visual arts.  By doing so, children can share feelings they find difficult to express otherwise and learn how to dream about their future.

Workshops are set up in the vicinity of the Golem to stimulate children to express their thoughts and emotions During these workshops, children are taught about different perspectives on reality, stimulating their listening and reasoning skills. Himself always silent, this giant protector empowers children by helping them find their own voice and identity. 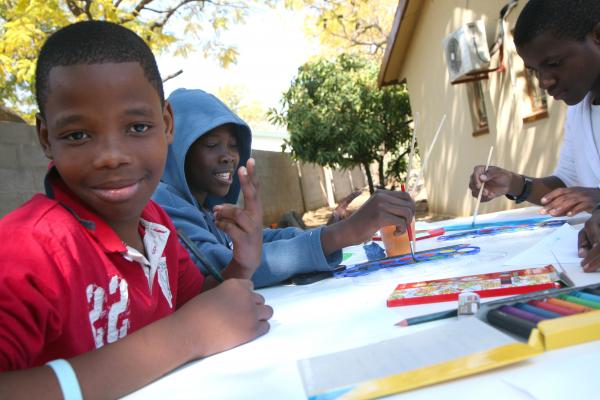 The CosmoGolem is always constructed with the help of children, under the supervision of the artist. Where the giant stands, children gather to communicate, philosophize, create and share in whatever form they choose. They can make artworks and deposit them through a hatch in the heart of the CosmoGolem.

By supporting the CosmoGolem ViaVia Entebbe contributes to its mission of connecting communities worldwide and encourages children from the neighbourhood to dream and create.

Read more about the Cosmogolem 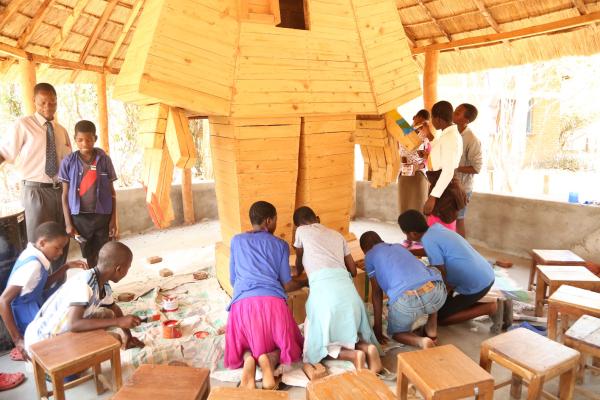 The Planetary Community Chicken crosses the enormous diversity of Vanmechelen’s enigmatic Cosmopolitan Chicken Project (CCP) with local indigenous hens.  Since its inception, the project has been shown in exhibitions worldwide and has attracted growing interest among scientists. It is scientifically researched at the International Livestock Research Institute in Ethiopia and at Linkoping University in Sweden.  In 2016, DNA research found that after more than 20 years of crossing, Vanmechelen has accumulated the largest pool of genetic diversity in domesticated chicken strains. 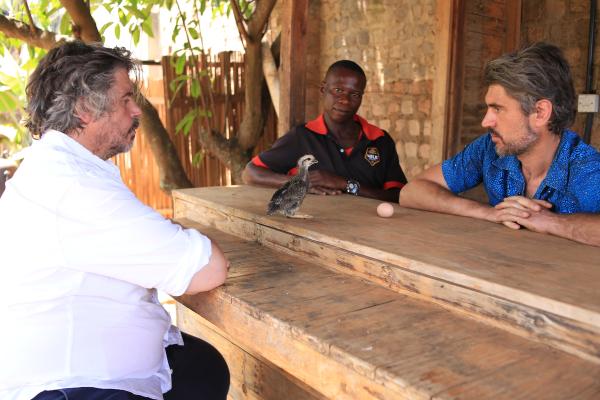 We aim to create a possibility for communities to have access to additional income and nutritionally-rich food with stronger, more resilient chickens.

The CCP introduces genetic diversity of 27 different breeds to local community flocks, thus enhancing the resilience and diversity of the birds. By crossing the roosters with local indigenous hens we create more sustainable chickens, prevent inbreeding and counter high mortality risk. It is also an effort to broaden, replenish and at the same time conserve the local bird’s genetic base.

In Entebbe, the Cosmopolitan Chicken will be crossbred with local hens. The offspring, the Planetary Community Chicken (PCC) will be distributed to local communities, providing them with eggs and meat. Every two years, new PCC roosters will be distributed to the communities, injecting new genes in the local chicken population. ViaVia wants to empower communities by handing out these resilient and productive roosters.

Chickens provide an inexpensive source of high quality food. In the past, several productive breeds have been introduced in Africa. These exotic breeds were, however, susceptible to diseases, difficult to feed and maintain. Vanmechelen's hybrids provide a solution. Many years of crossbreeding have proven that each generation of newly crossed Cosmopolitan Chickens is more resilient, healthier and lives longer. Bringing together the global Cosmopolitan Chickens and the local chickens, generates the possibility of a new sustainable kind of evolution. 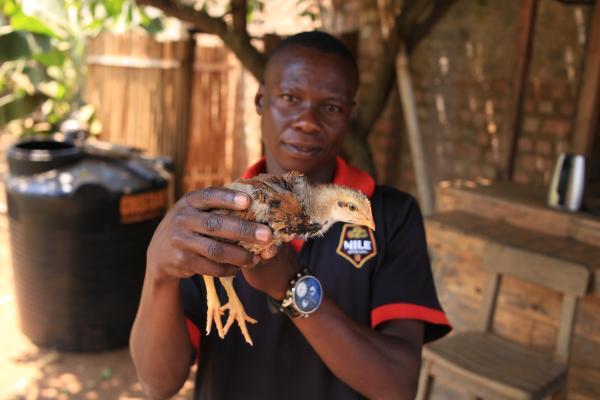 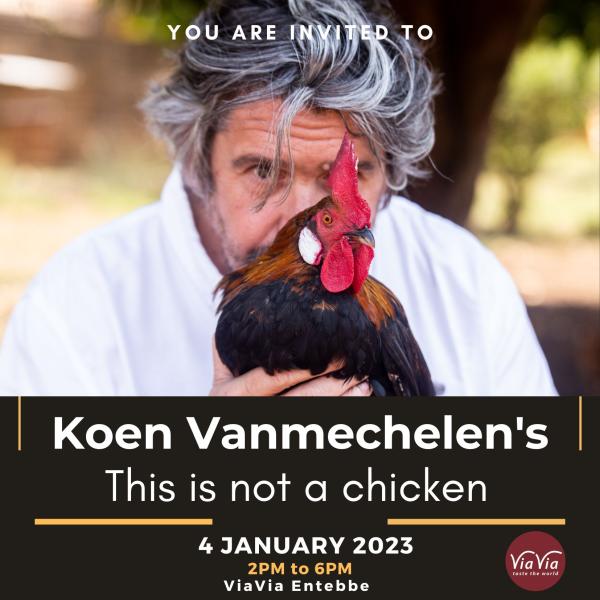 The ViaVia in Entebbe will serve as the breeding place from where the uniquely diverse cohort of chickens are distributed to the communities.

Over 20 years ago, Belgian Bob Elsen founded the first ViaVia in Belgium, a pioneer in sustainable tourism. Since then, ViaVia has been developing projects worldwide. Vanmechelen has often visited a ViaVia café in Africa.

“The philosophy of this organization is appealing, through the perspective of tourism as a source for intercultural encounters, increased tolerance, and socio-economic development. A partnership with the ViaVia has been in the cards for many years." _ Koen Vanmechelen 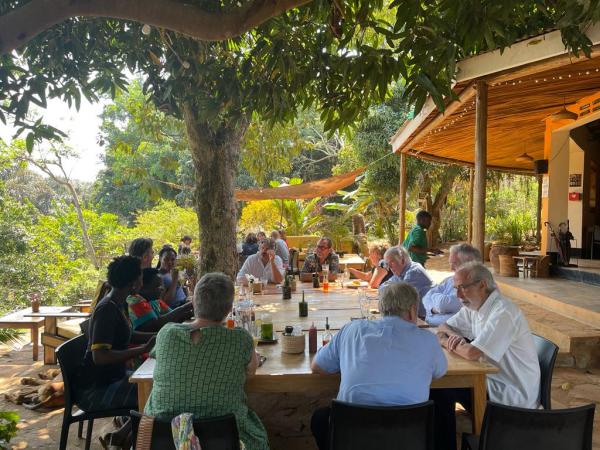 Just like art we try to amaze and transform people, in our case whilst traveling across the world and experiencing the social entrepreneurship of the ViaVia Joker network. 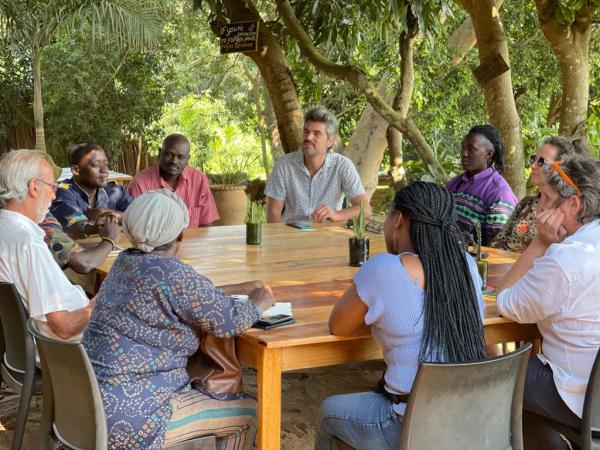 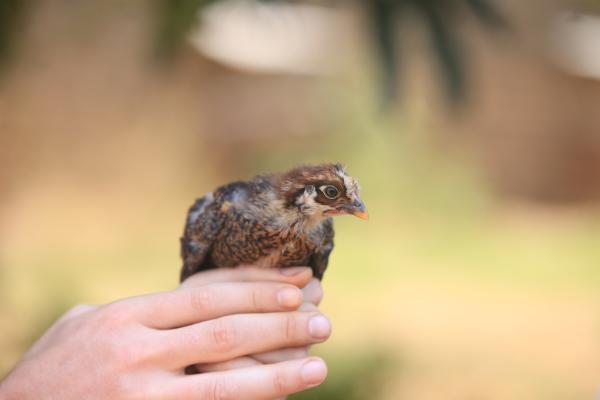