The various phenotypes show characteristics of the three different chicken breeds that were crossed into of this generation of the Cosmopolitan Chicken Project / recognisable traits from Belgium, France, and Great Britain.. 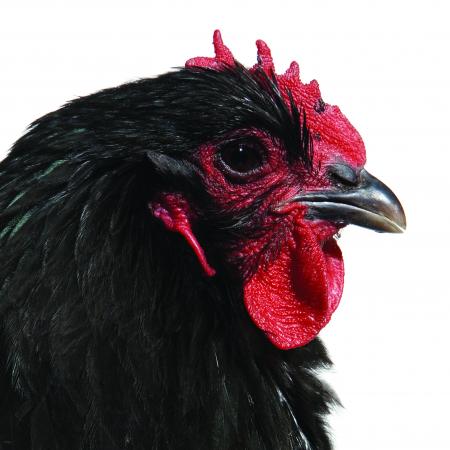 Bred in the United States at the end of the 19th century / named after their state of origin (New Jersey) / because of their large size, they are considered the world's heaviest chicken breed / slow growers, they’re rarely used by the poultry industry for their meat / hens are good layers (large brown eggs, also in winter!) / plumage in black, blue or white / willow-green legs with yellow soles..

The search for a few specimens of the Jersey Giant produced some crazy scenes. Vanmechelen went on an expedition to the suburbs of glamorous Miami Beach (US) and was shocked by the degree of neglect at the local chicken farms – the purpose of his journey. The area turned out to be a focal point for illegal nurseries, and the artist was chased off no less than three properties: the owners of the (illegal) farms were suspicious and felt threatened by the presence of camera man Alex Deyaert, who was documenting Vanmechelen’s project at the time. The farmers suspected the duo were under cover for the Animal Services Department, which created distrust. At a certain point, the expedition even had to be stopped, so it could be resumed a few days later with a lower profile – taking into account ‘the industry’s sensitivities’. This eventually allowed Vanmechelen and Deyaert to return home with a few specimens of the Jersey Giant. 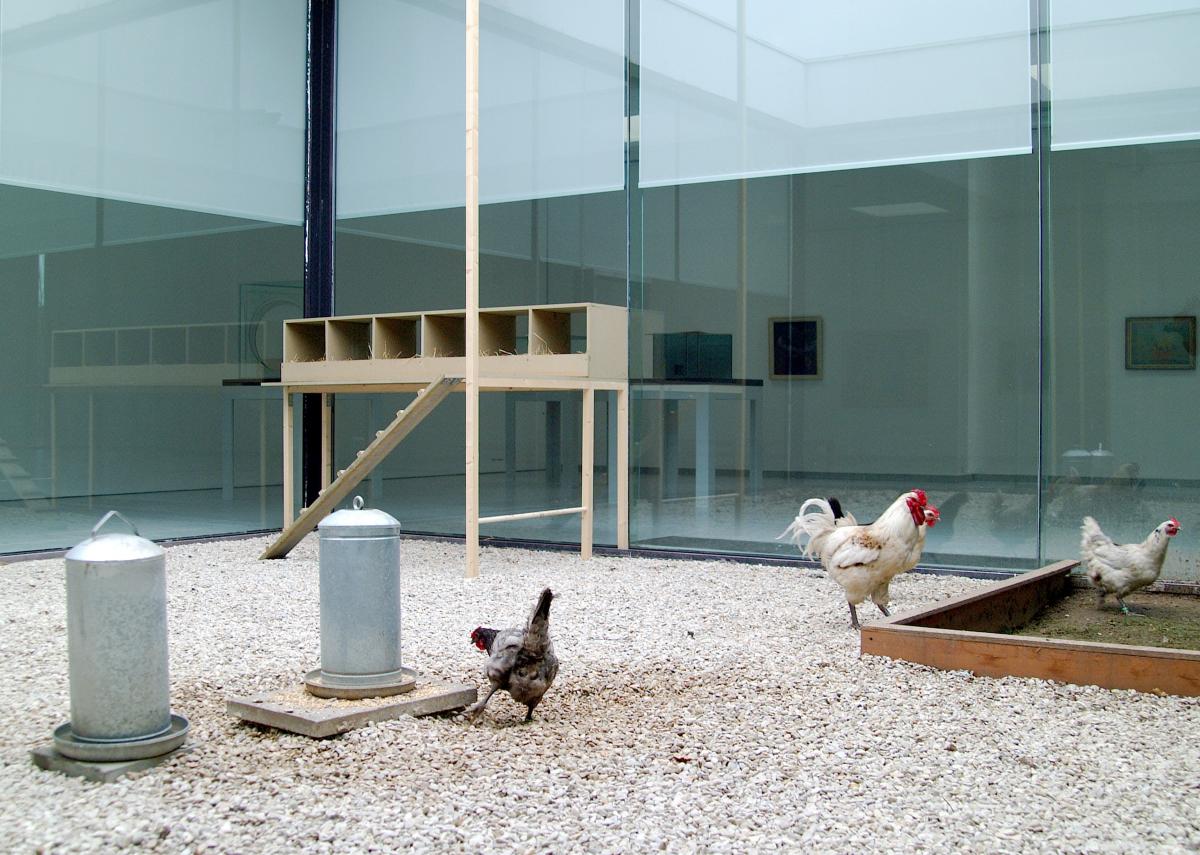 Shortly after Vanmechelen felt the need to include America into the story - to cross the Jersey Giant, the largest chicken in the world, with the Mechelen Redcap - 9/11 shook the world on its foundations. When Berengo Fine Arts invited him to produce an installation for the Miami Art Fair, the artist was convinced that travelling to America with live animals made little sense in the paranoid climate of the day (and might not even be feasible due to import restrictions). So, he crafted an Artificial Cross-Breed for the Fair: transforming the body and head of a deceased Mechelse Redcap into two ‘artificially-crossed’ animals, by adding abstract glass pieces. The transparency of the glass represented the desire for a new crossing. At the same time, the artificial composition also expressed a new global fear: 9/11 forced the artist to put his cross-breeding project ‘on hold’, as it were; his belief that the world can become whole again by consecutive cross-breeding suffered a temporary, but serious setback.

Nevertheless, Vanmechelen had already restarted ‘real-life’ cross-breeding at home, even before the Artificial Cross-Breeding was shown to the public. The Mechelse Giant turned out to be another powerful and healthy new chicken breed! 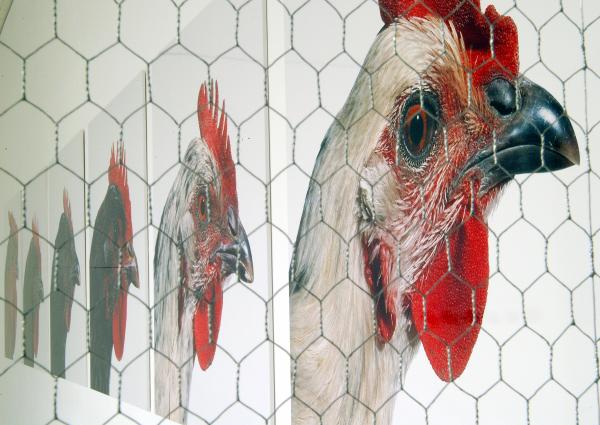 03 February - 13 March 2002
Artists often create work that doubles as meeting places. Take for instance the chairs of Franz West (AU), the pavilions by Dan Graham (USA) and the (massage) rooms and bars by Alicia Framis (S). In his work on 'The Cosmopolitan Chicken', Koen Vanmechelen (B) on the other hand explicitly focused on ‘crossing borders’.