Symbolic dimensions such as art and science - human culture - are the building blocks of the human world. They are a reaction to existential dread, to the realisation of living in an uncaring, and hostile natural world. The human animal protects itself against this knowledge by spinning its own web of significance. At this moment, the human world is destroying the natural world and we are about to lose our grip on the symbols once created to give meaning to our lives. The garden of Eden has become a wasteland, the Tree of life is barren.

In the exposition Do Not Argue – D.N.A., Belgian artist Koen Vanmechelen shows his unrelenting quest to counter this devolution with examining and launching new symbols and to find new meaning. Like seeds, his art, his narratives, his ideas are dispersed throughout the world on the winds of thought, the fire of movement and the waters of passion. 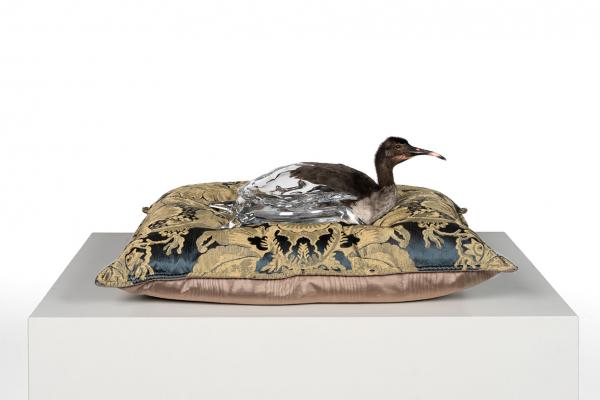 The central aspect in the show is a given: D.N.A. It is the cement of our personal successes and failures, our ambitions and fears. Unlike our own D.N.A., however, we can manage the D.N.A. of communities. The eight artworks and installations on show in Durbuy, represent a selection from Vanmechelen’s vast and unique oeuvre that tell the tale of diversity. For more than twenty years, this conceptual artist and thinker has been developing a new understanding of the condition humaine through many expeditions and forays to animal and non-western cultures worldwide. The extensive knowledge and praxis, the context-dependent memes and genes he encountered, he is weaving into a multi-layered tapestry of projects.

His studio LABIOMISTA, reveals this philosophy of mixing and mingling, trying out new and unexpected genetic and memetic combinations. Coding them in a new artistic language. Central to many of Vanmechelen’s projects, at first, was the chicken, a golden bird that has been instrumental in the dispersal of human cultures over the planet. In the past ten years, Vanmechelen’s intense quest for a new symbolic language has incorporated many more species. Like the pigs on display in Durbuy. And a wider scope, involving human rights and the right of non-human animals.

In his Protected Paradise domain in the Cosmopolitan Culture Park surrounding LABIOMISTA, on the border between jungle and civilization, Vanmechelen combines in his hybrid art animals, with science, technology, and with materials and memes from indigenous cultures. He then sends them out to outposts worldwide, finding the right context to hatch, break through the scale and migrate elsewhere on their own accord.

Vanmechelen moves between the human, so-called civilized world and the jungle, in a Perpetuum mobile that, according to him, is the umbilical cord between human existence and life in general. The destruction of wilderness - the wild, the other, and alien – has shifted the jungle inside the human animal, it has become a psychological dimension. From the prey, the human-animal has become the predator, and one cannibalizing its own species. Terrified by all. Bella omnium contra omnes. The cure, Vanmechelen states in D.N.A. lies in renewed and radical diversity through recombining ancient elements with brand new ones. 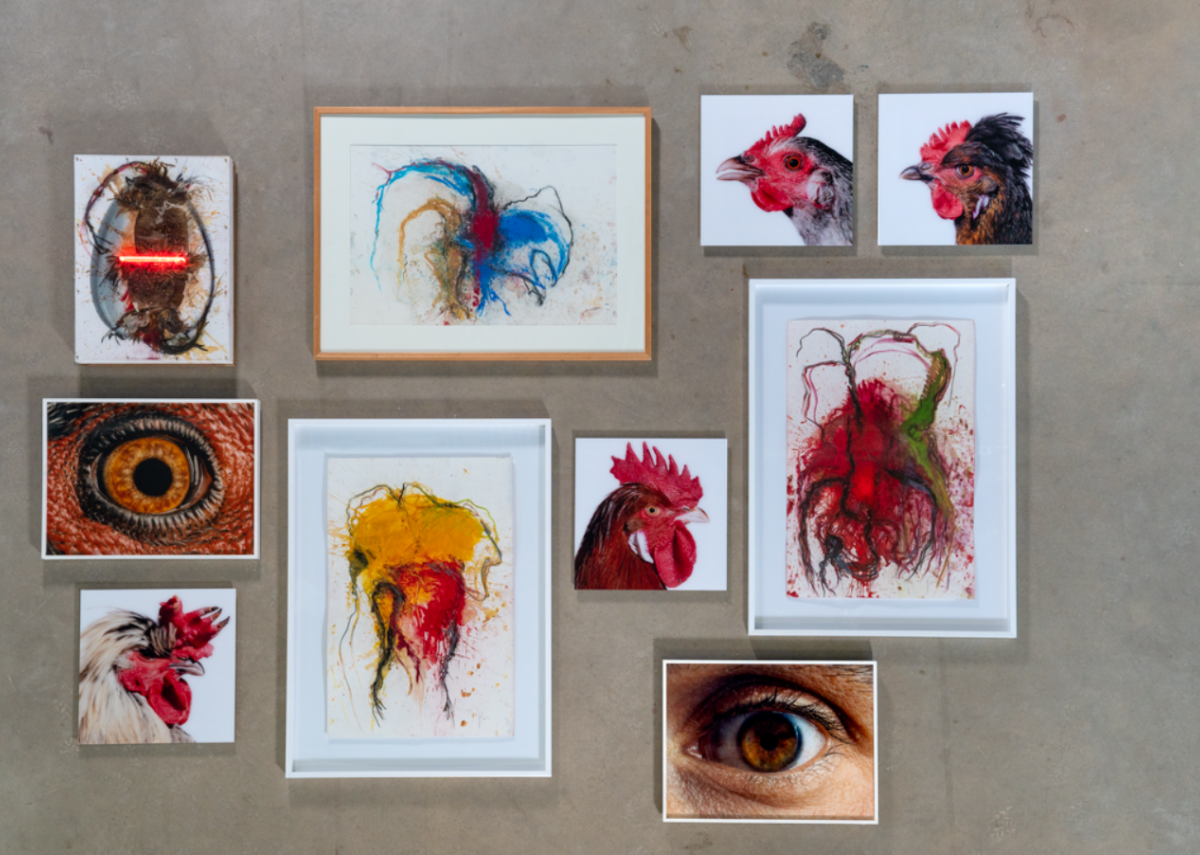 The central work Do Not Argue or D.N.A. shows two hogs who are so interacting with each other they lose their reason. They melt into each other, representing the big bang of a new universe. A cross, or is it the symbol of a kiss, is the only thing separating them. The result of this explosion, the birth of a new momentum, are the other works on display.

A cabinet with taxidermized chickens, glass and hybrid ones, offers the possibilities of artificial crossing. Out of all this, a New Generation might arise. The process of crossbreeding in itself is shown via a hybrid artwork consisting of feathers and a glass mask. Elements in this bird are visible, some are invisible and dormant. The rise of new symbols, those so needed narratives that guide us, is expressed by the work Fables and Fantasies. All from an alien culture, hybrids rest on four cushions, the epiphany of various webs of significance. Imprints of cultures in which locus and spirituality are inseparable, cultures with strong roots in the natural world. Other works on display are Temptation, a mural collage of drawings, paintings, pictures and chicken portraits – possibilities before the act of creation -  and eyes that see all. The current COVID-19 virus is breathing through the litho’s that are being sold to support Vanmechelen’s Mouth Mask project. The proceeds go to vulnerable communities worldwide and the funding of sewing workshops established by partner organizations.  A consequence of the pandemic is that new gods arise, as shown by the Medusa with deer antlers, snakes and pheasants. It is not the time to ask questions about the explosion and its consequences. Hence the title Do Not Argue. Leave all prejudices. What happens is the result of what’s been coded in our D.N.A. for tens of thousands of years. Do not yet ask for the meaning and significance of what is happening. Do not argue. Wait. 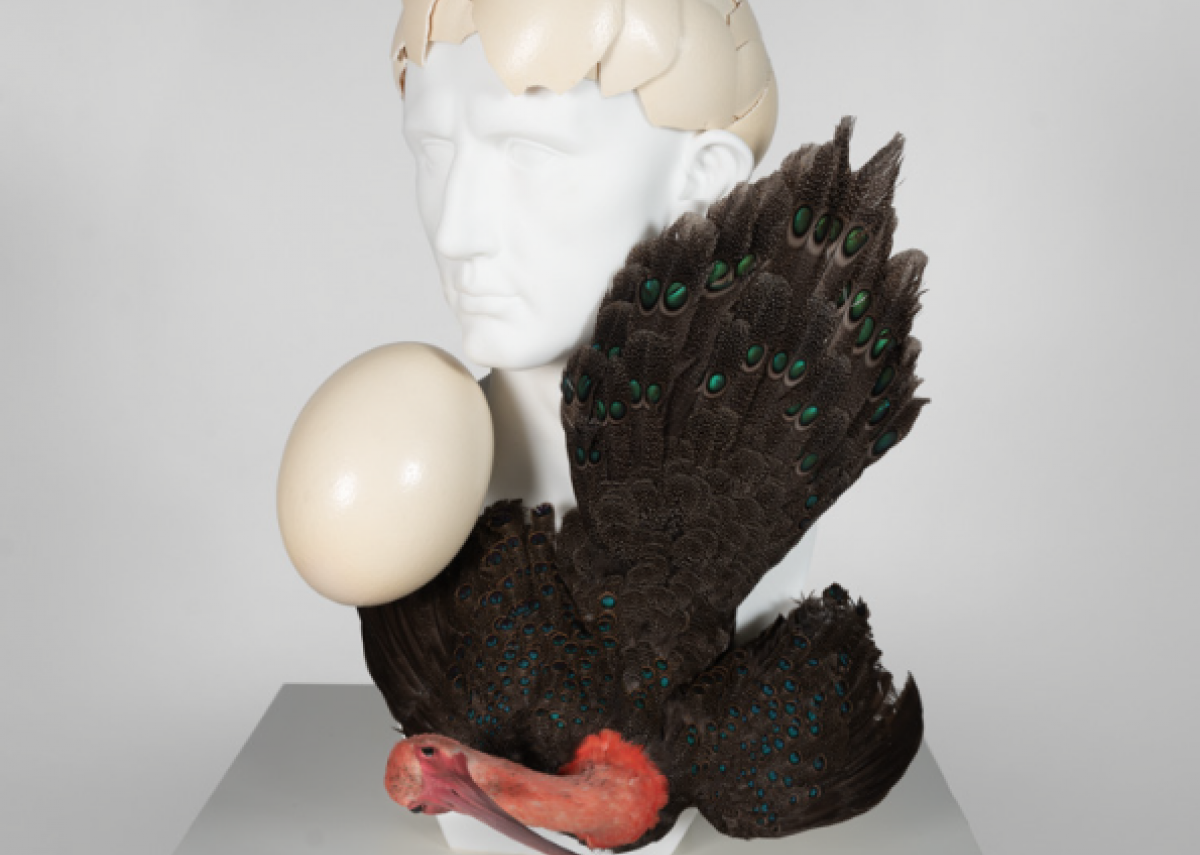 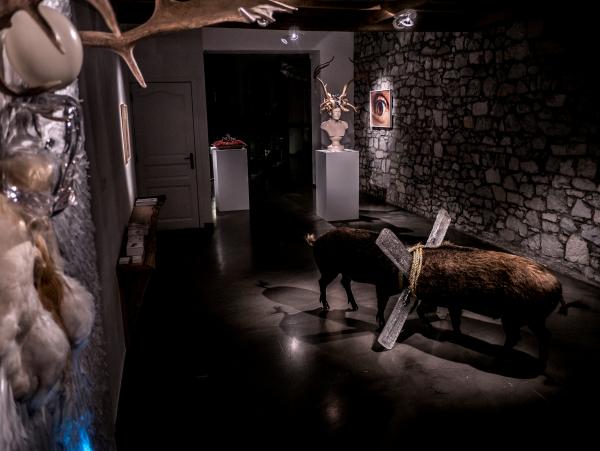 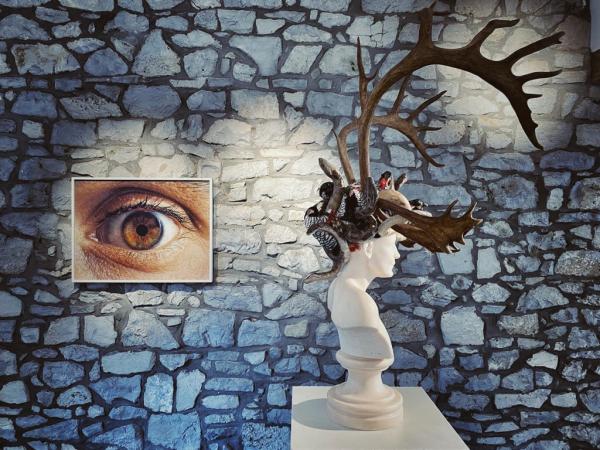 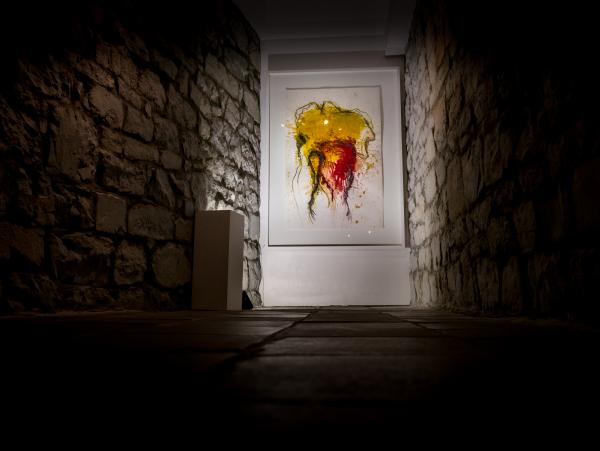 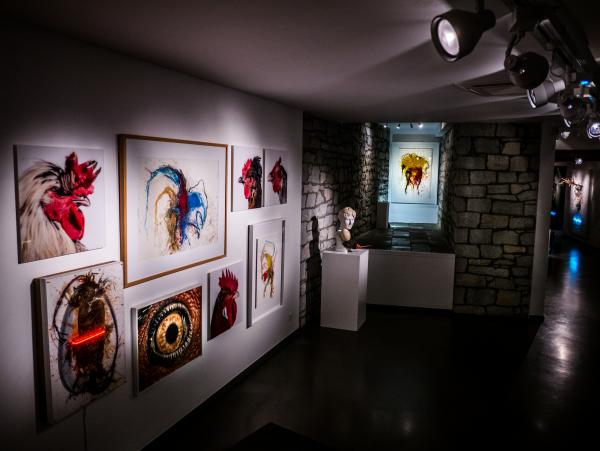 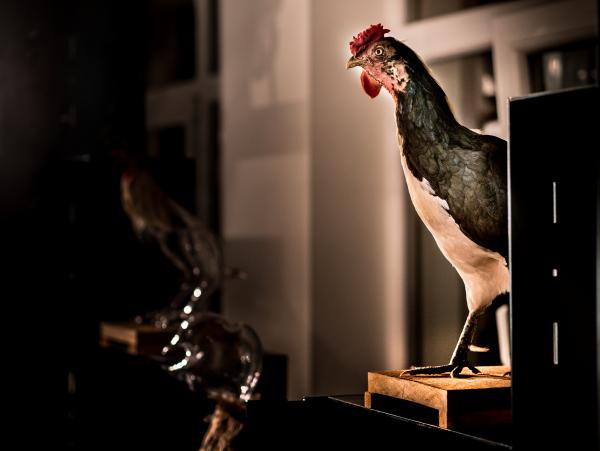 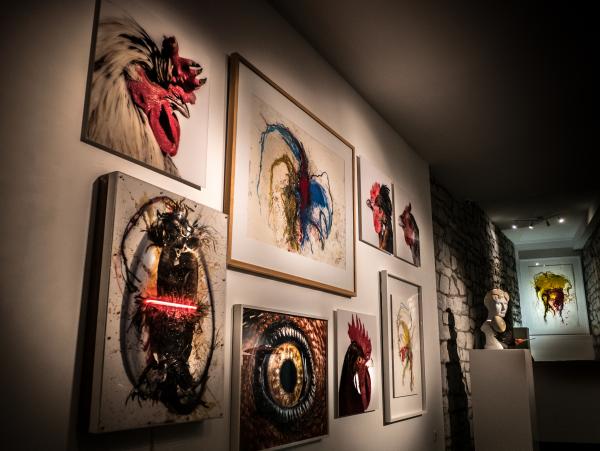 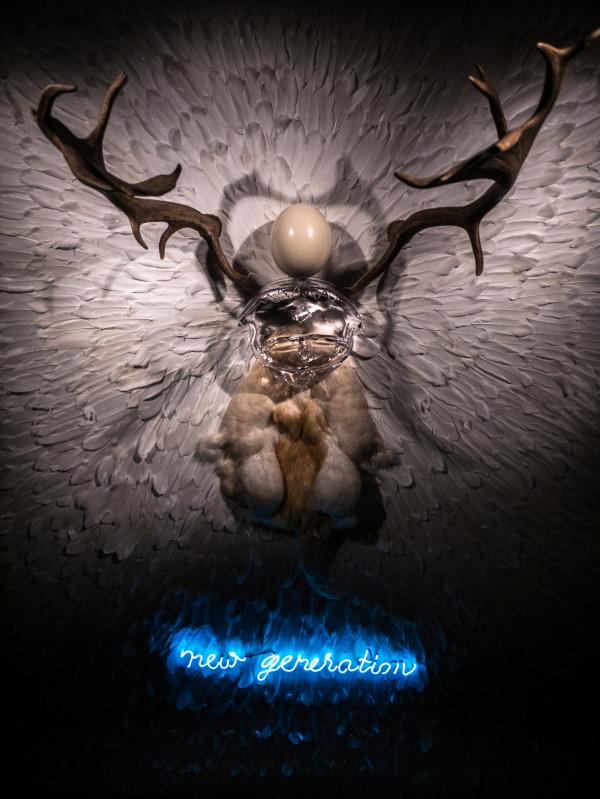 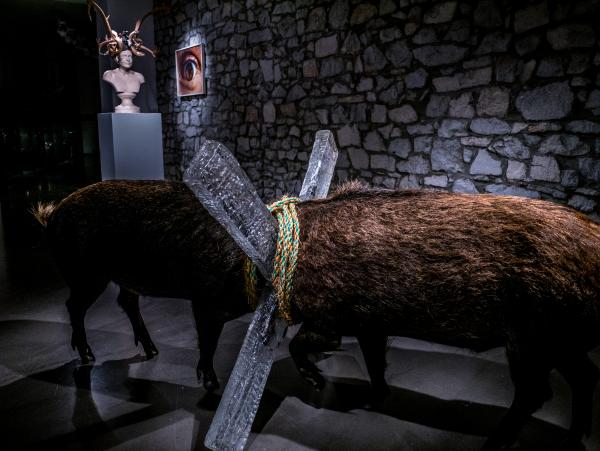 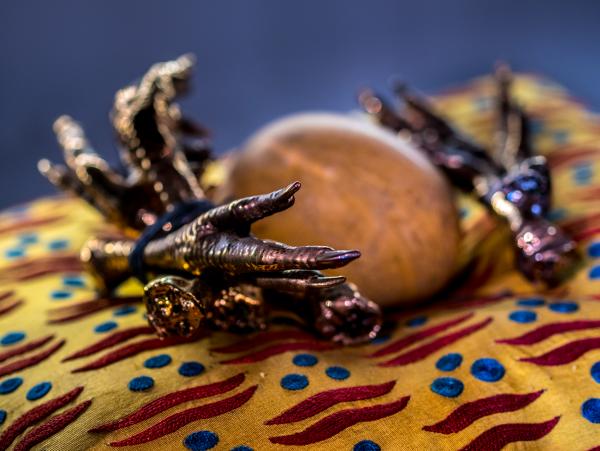 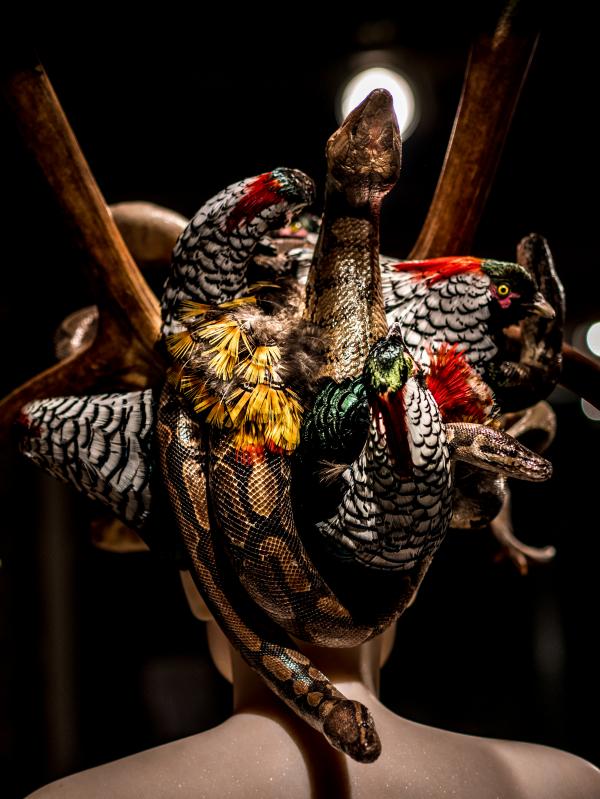 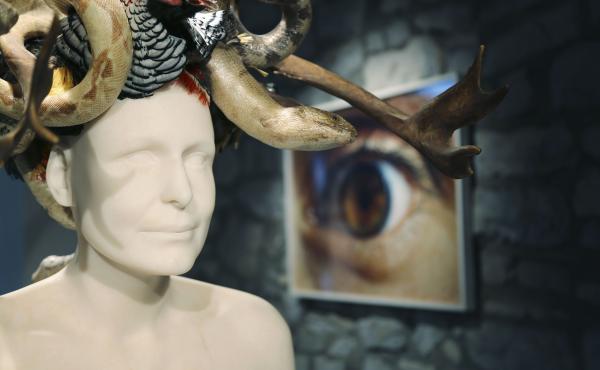 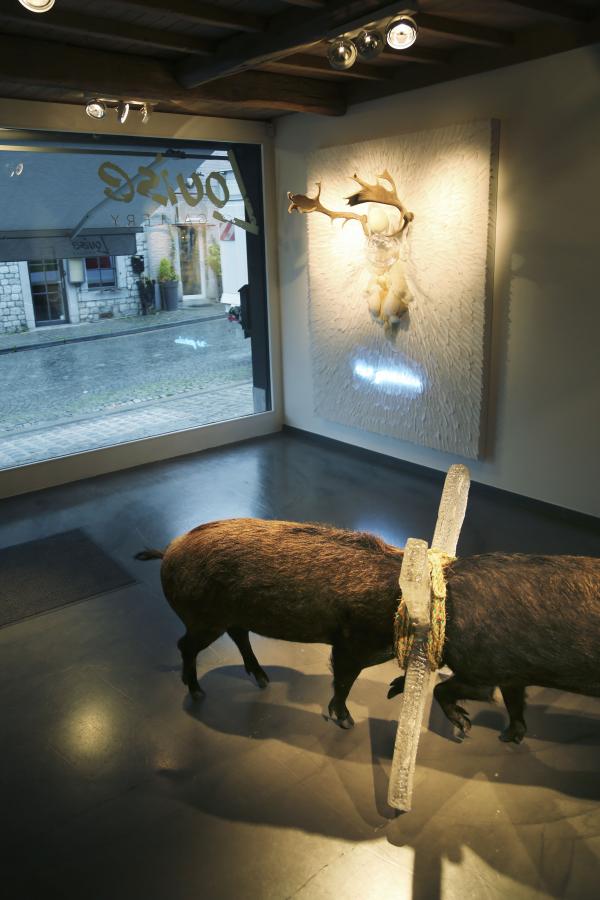 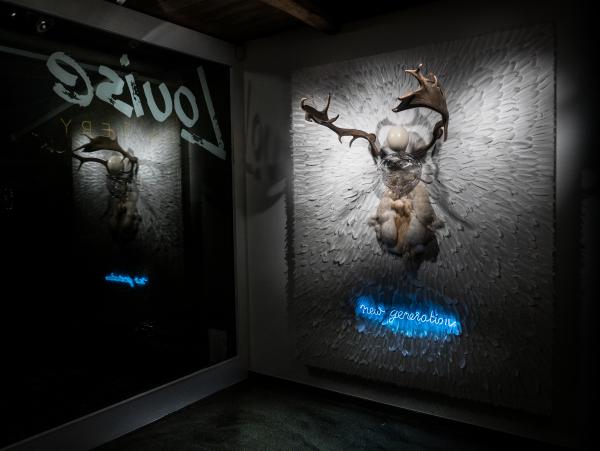 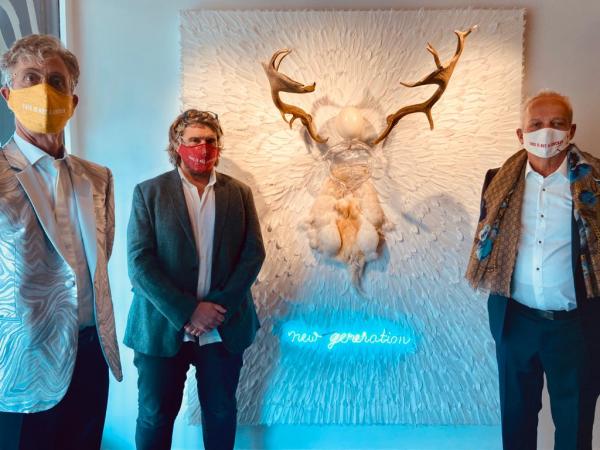 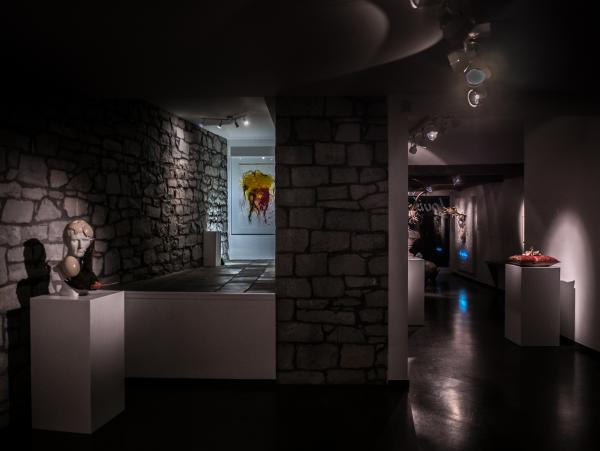 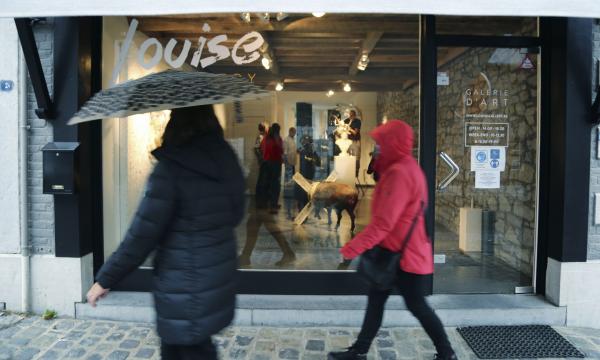