From 29 October 2022, Koen Vanmechelen (°1965, Sint-Truiden) is omnipresent in Knokke-Heist and in Cultuurcentrum Scharpoord with a major exhibition. With Cosmopolitan Renaissance, he presents an out-of-the-box exhibition that unfolds as a total experience. Besides drawings, paintings, sculptures, installations and videos in the upper and lower hall of Cultuurcentrum Scharpoord, the show also includes performances, outdoor installations, lectures and crossovers with MAAK – Open House for the Arts, and the Zwin Natural Park.

In collaboration with the curator and art historian Jo Coucke, various aspects of Vanmechelen’s multi-layered work are highlighted. Visitors to Vanmechelen’s multiverse land, as it were, from one reality into another. Each time, it is about the relationship between humans and animals, about spirituality, identity, cultures, hybridity, and human and animal rights. Fundamentally, his work revolves around the love of life. Life that is under pressure. From new ideas, fusions and connections, and by exploring new borders, a cosmopolitan renaissance can arise, Vanmechelen argues, with an unmistakable nod to the historical Renaissance. 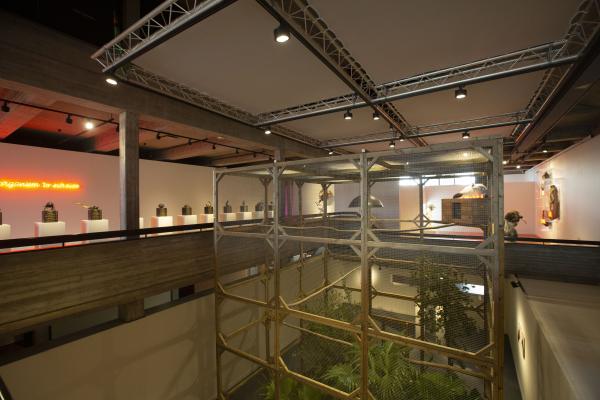 If the man of the present Anthropocene era, who currently weighs far too heavily on the world, is to survive together with that world and nature, he urgently needs a global rebirth. For this, we humans may feel free to look back to the past – to the attitude of the Uomo Universale of the Renaissance of the sixteenth century, for example, who linked knowledge with imagination – because the future depends on what we do or do not remember from the past.

Since the very beginning of his artistry, Vanmechelen has been dealing with the question of the future of our species: How should humans move forward? How can we as humans coexist sustainably with other species while respecting the environment of even the smallest creatures? Over the past 30 years, Vanmechelen has travelled around the world. Whether among indigenous peoples like the Masai, or up high in the skyscrapers of Mumbai, Vanmechelen has searched for the constituent pieces of his world puzzle. The Cosmopolitan Renaissance exhibition shows those pieces and inspires answers. Again and again, Vanmechelen has taken various basic ingredients from his artistic universe and combined them into new stories. 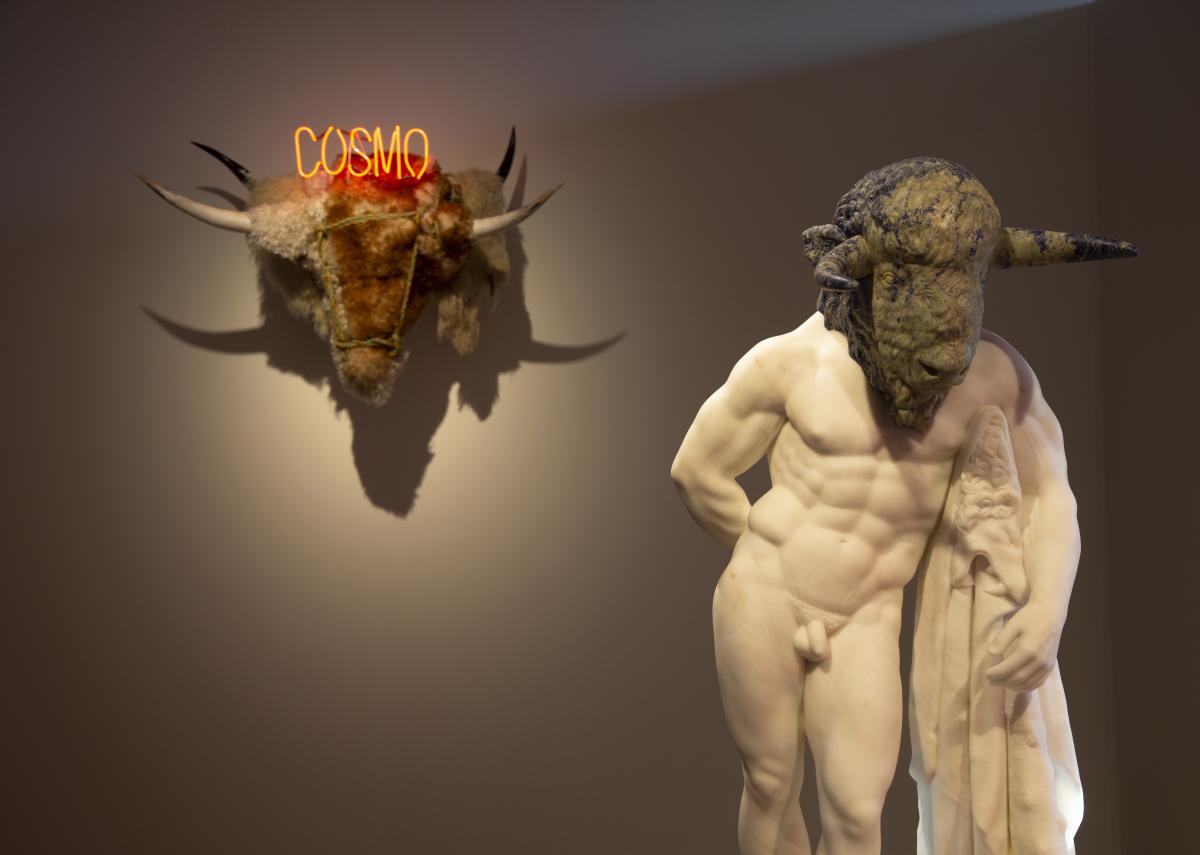 Cultuurcentrum Scharpoord
Daily from 10 to 18 hours, except Tuesdays
(open daily during vacations)

Nocturnes until 9 pm on Wednesday 9 and November 23, Friday, December 16 and 13 January. Guide service on Sundays (included in ticket price) or paid by appointment. 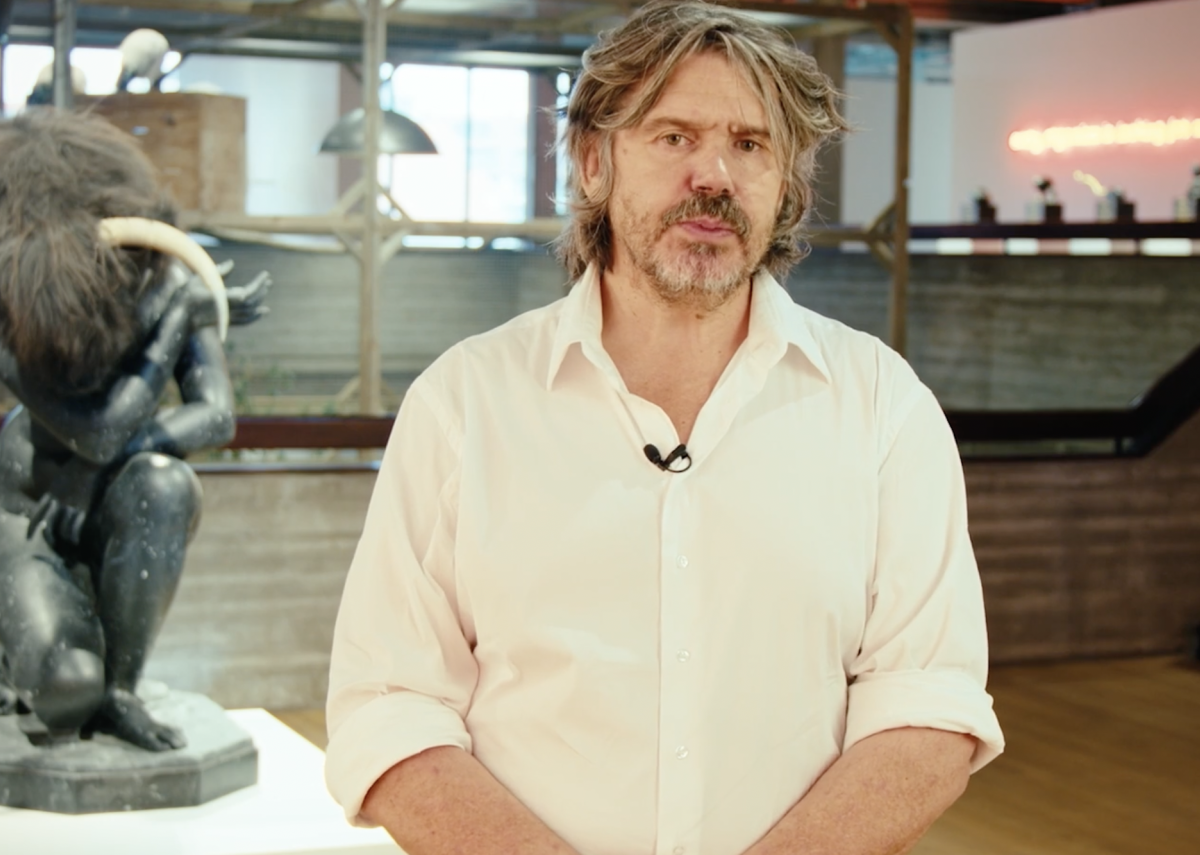 Outdoor installation
The Eye of the Needle

Koen Vanmechelen introduces you to the camelids and the knowledge that is hidden in these fascinating animals.

Don't miss the outside sculptures

In Between
Zeedijk near Grand Casino Knokke 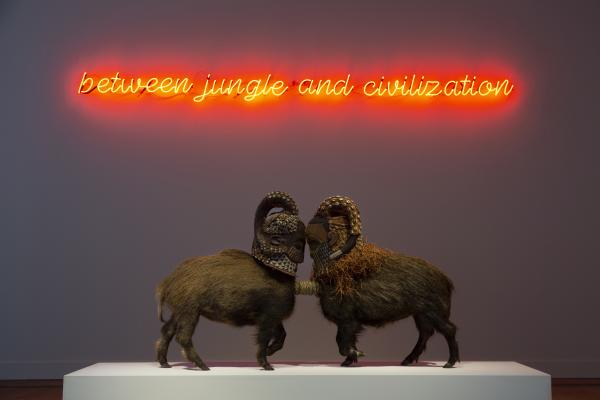 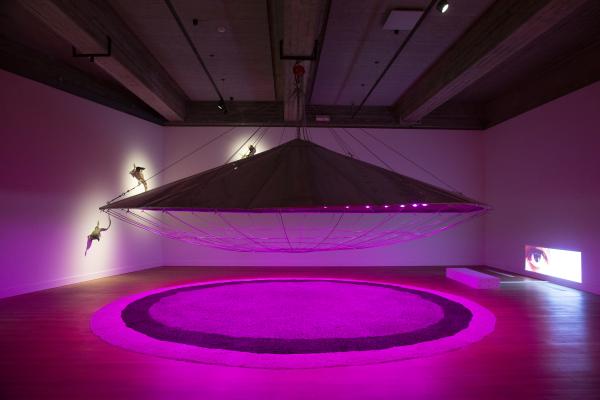 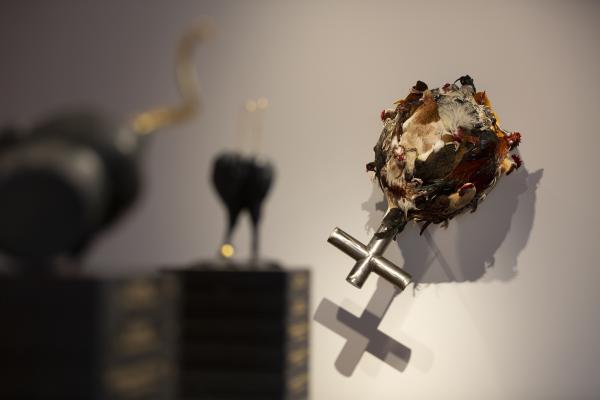 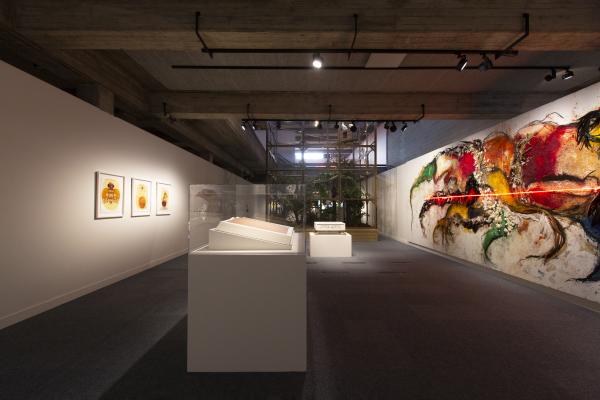 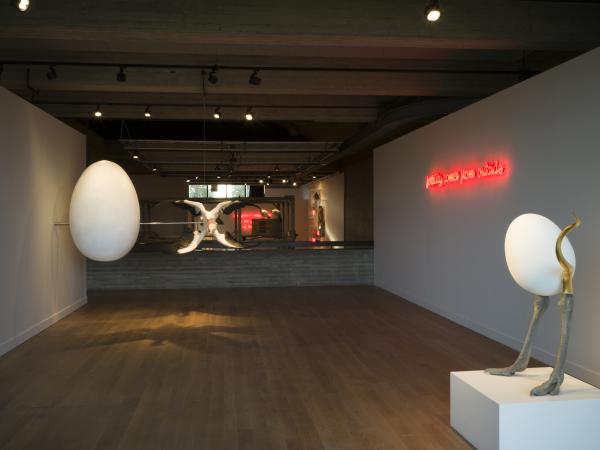 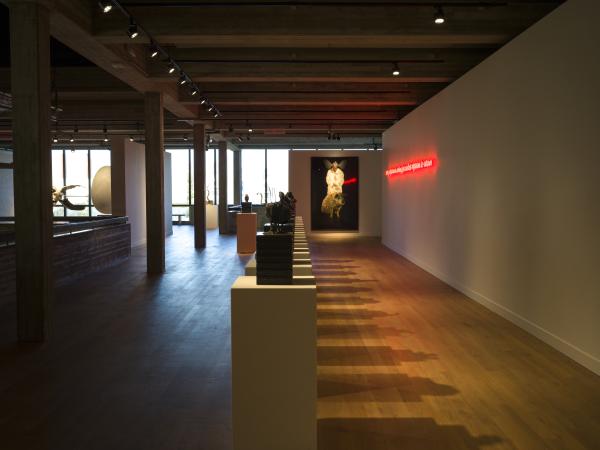 Opening performance
"The Eye of the Needle"
Saturday, OCT 29
Scharpoordtuin

In the garden of Cultuurcentrum Scharpoord, Vanmechelen presents the installation The Eye of the Needle; a metaphor for the apparent impossible. With this installation, Vanmechelen introduces the visitor to the camelid and the knowledge hidden in this fascinating animal.

For the opening, Vanmechelen created a performance under the same title. With The Eye of the Needle, Vanmechelen brings a contemporary interpretation of the circus; an age-old attraction that brings together humans and animals, mixes cultures and seeks enlightenment through movement. Presented by Jeroom Snelders, with lectures by Chido Govera, Koen Vanmechelen, spoken word interventions by Hind Eljadid and live music.

The Eye of the Needle, Koen Vanmechelen 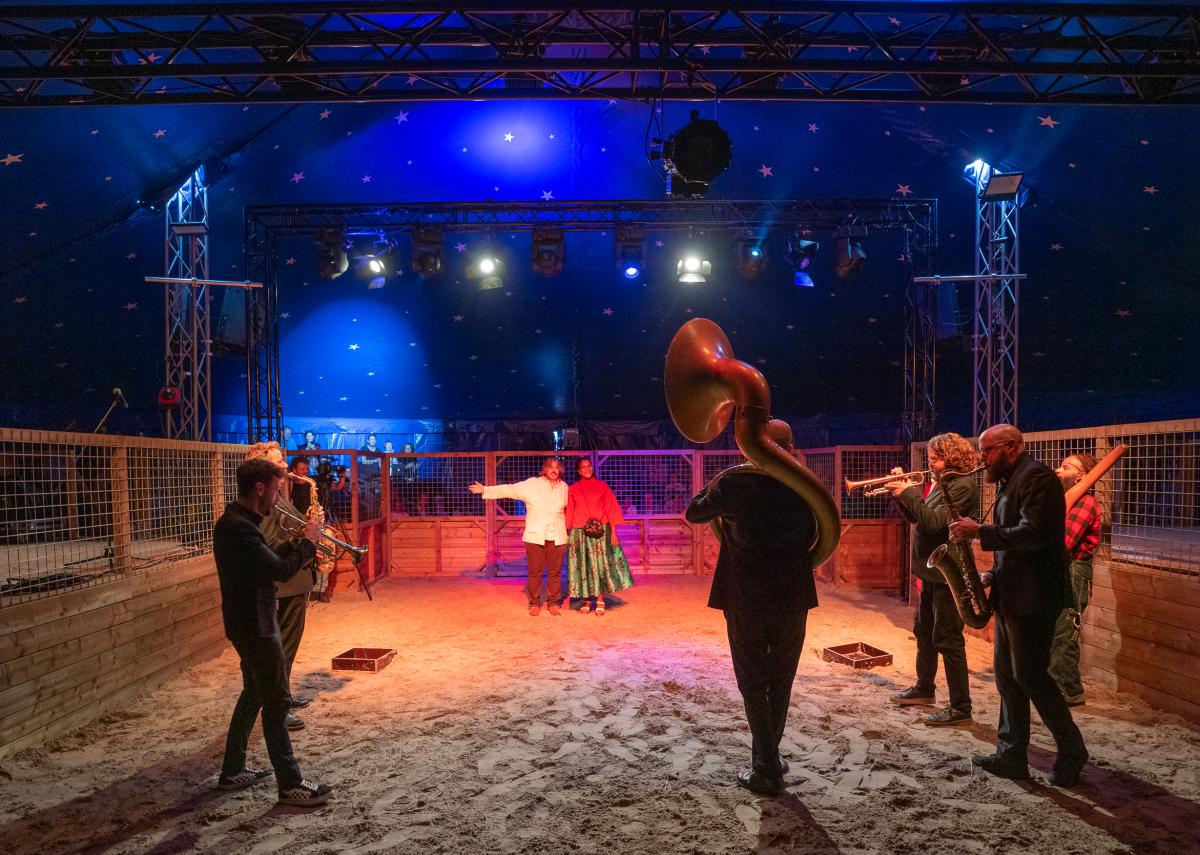 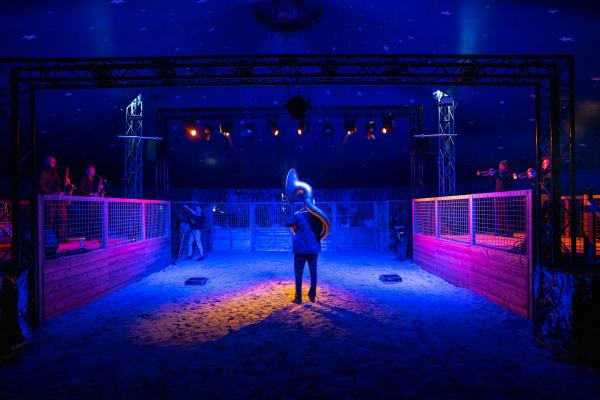 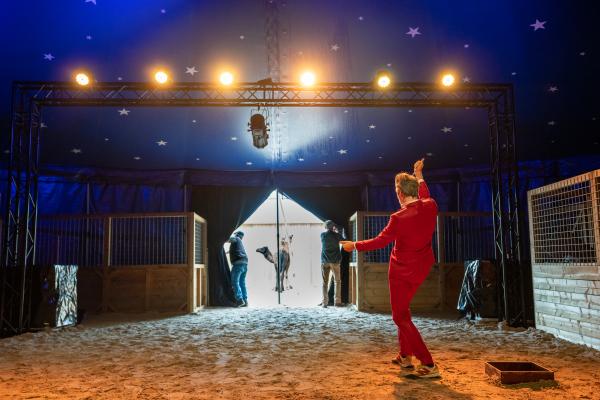 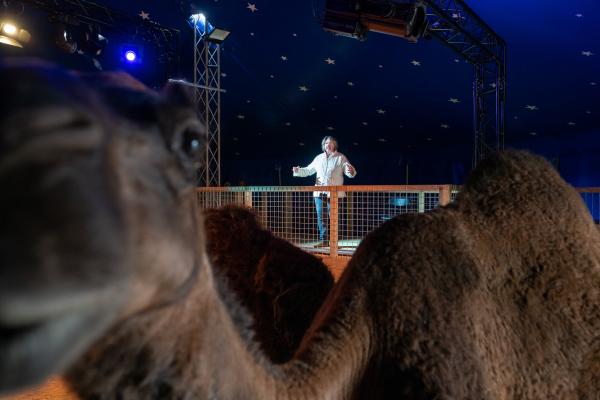 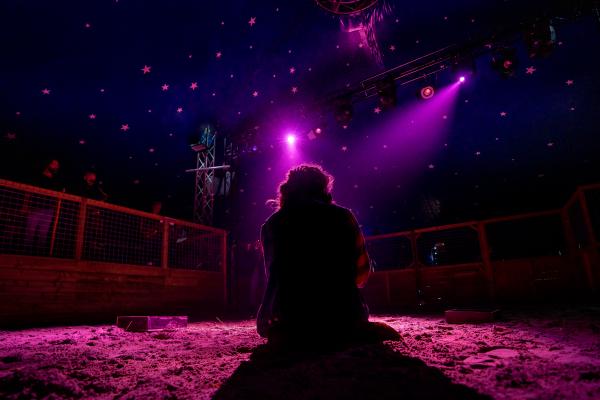 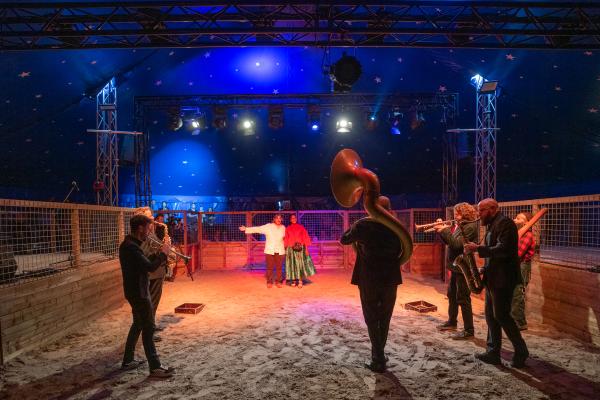 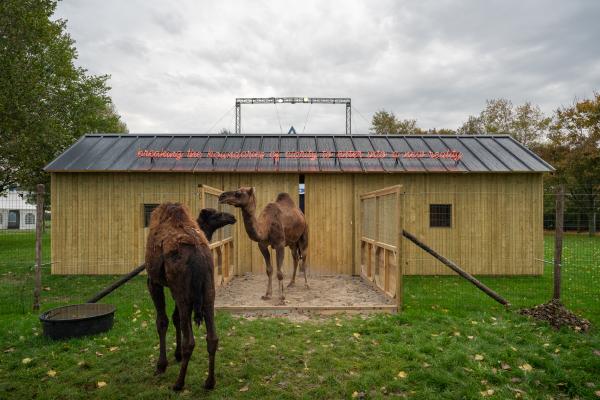 Being swept away by a perfect storm. Enchanted by powerful visions that mingle with Magritte's dream images. That was Riders on the Storm, a must-experience multimedia performance in the Magritte Room of the Grand Casino Knokke. This shamanic total experience is created by Koen Vanmechelen and is part of his Cosmopolitan Renaissance; an out-of-the-box exhibition that unfolds as a total experience this fall in Knokke-Heist.

In the exceptional context of the Casino, under the cloud-blue eye of René Magritte, the spectator for four hours became part of a unique, multidisciplinary and dazzling installation that played on all the senses. With haunting musical interventions led by B-Classic, with a three-course lunch specially created by the Boxy's, and with overwhelming word and image interventions by Koen Vanmechelen.

360-degree projections drag the spectators through a perfect storm. A spirited duel between Magritte's "The Enchanted Empire" and Vanmechelen's fantastic mindscapes. In a surreal setting, somewhere between tension and relaxation. It became a magical quest along different dimensions; man - animal, water - desert, dark - light, and finally to the beginning of a resurrection. A Big Bang. A revelation. A rebirth leading to a rediscovery of the world. A Cosmopolitan Renaissance can begin.

In co-production with Cultuurcentrum Scharpoord
supported by Linda & Guy Pieters 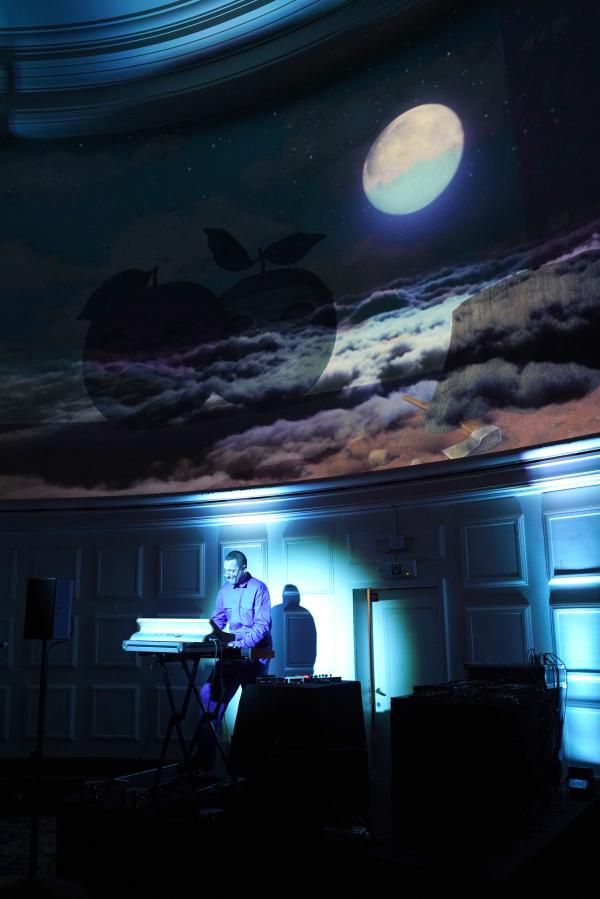 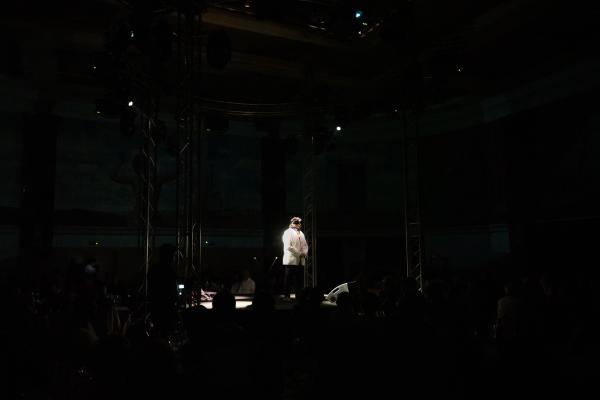 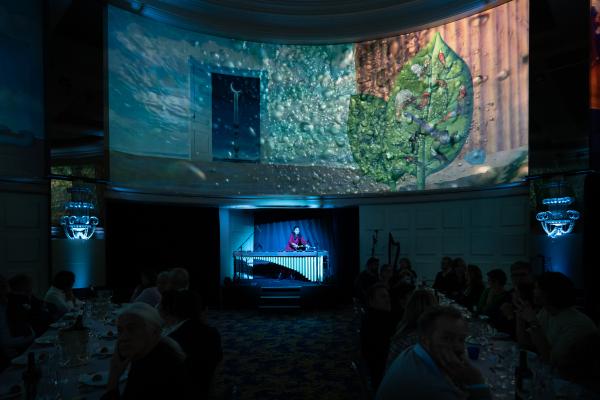 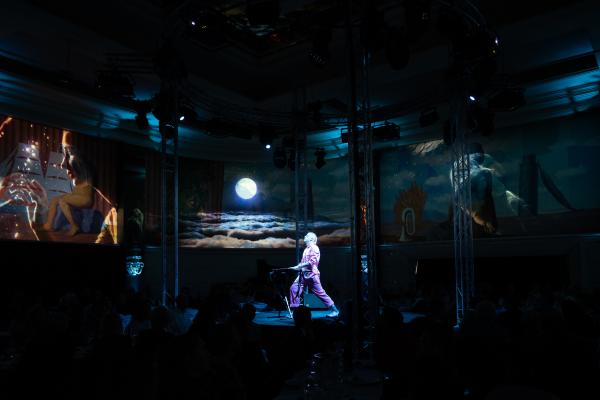 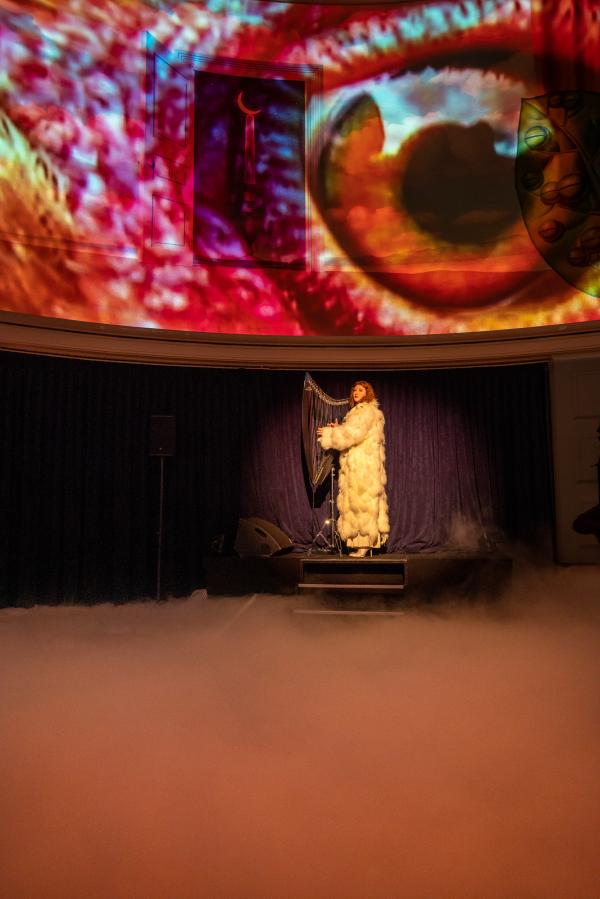 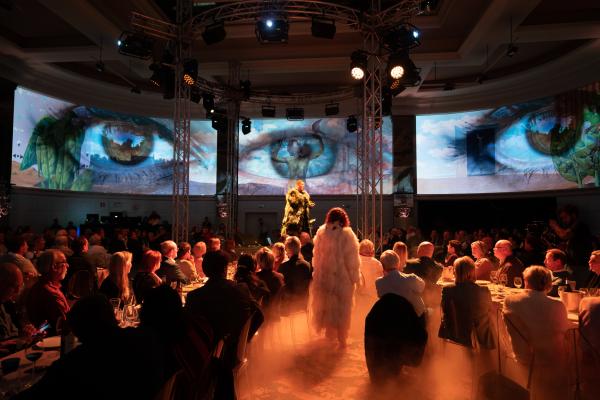 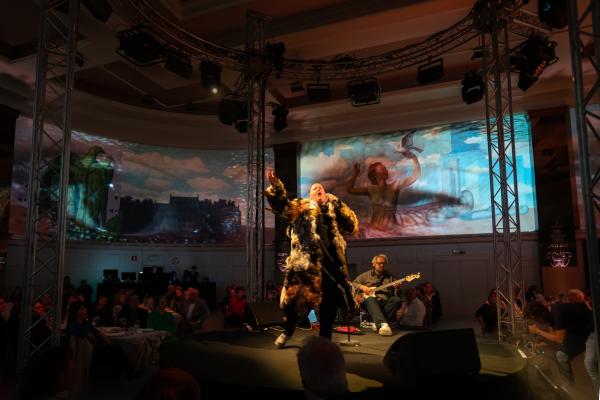 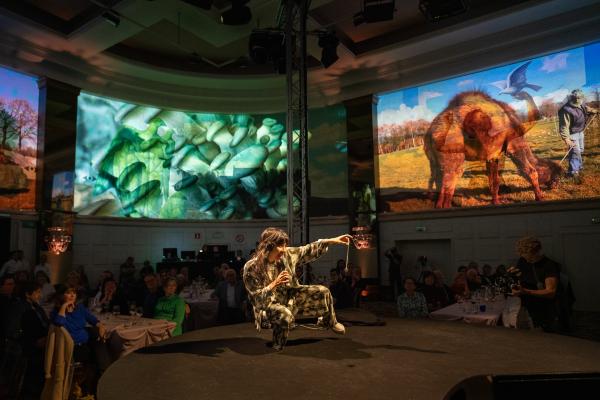 The students of the Academy are inspired by Vanmechelen's renowned Cosmopolitan Chicken Project (CCP). Discover the 27th crossing, the Mechelse Haughænsni, in this (living) installation.

A fascinating duo lecture by Koen Vanmechelen and Dirk Draulans incl. debate and Q&A, moderated by Jo Coucke (curator).
We follow the stork in a story of life and rebirth, domestication and rewilding, quarantine, safety and captivity and the importance, necessity and the risks of migration.

For no less than six years, filmmaker Joris Gijsen followed artist Koen Vanmechelen on his work trips across the globe. This 70-minute documentary reveals the motivations behind Vanmechelen's relentless energy and how the artist constantly broadens his philosophy through remarkable contacts with scholars such as Jean-Jacques Cassiman, architect Mario Botta, international curators, thinkers and local
communities. 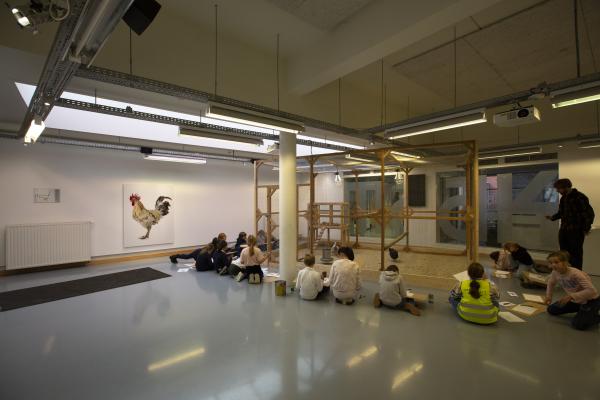