Summer 2000. The Poetry Summer at Watou, the major artistic event of the summer in the border region between Belgium and France - a symbolic coincidence? - is celebrating its twentieth year. The anniversary edition focuses on the dynamism exhibited by small countries or countries with a smaller language area within the European context. Places of unrest can sometimes turn into a font of creativity, a phenomenon that in economic science is termed ‘storm centers’. As is his habit, guest curator Jan Hoet sticks out his neck for this edition and pulls a few white rabbits from his hat – some shaped like off-white chickens: Koen Vanmechelen’s still nascent Cosmopolitan Chicken Project. Watou showcases a chicken coop, in which an impressive gray rooster of the Mechelse Koekoek breed is surrounded by a harem of poulet de Bresse hens. More than ever, the twentieth edition of Watou’s Poetry Summer aims to bring culture into nature, and the introduction of the Cosmopolitan Chicken Project, with the questions that it raises about the way humanity interacts with its surroundings, is right on the money.

Koen Vanmechelen’s live chickens are an eyecatcher at the poetry and art happening in Watou. Selected by curator Jan Hoet, the artist crosses a Mechelse Koekoek and a Poulet de Bresse to produce a Mechelse Bresse, the first generation of his Cosmopolitan Chicken Project. Vanmechelen’s chicken is a trailblazer for what humanity will be experiencing in the 21st century. As tradition dictates, event organiser Gwy Mandelinck has chosen a poem to accompany each installation. In the case of Vanmechelen’s chickens, it’s an anti-racist poem about freedom in a cage or a labyrinth: "there is no freedom in the sandy desert; if you want to be free, it’s better to wander gracefully through the labyrinth." 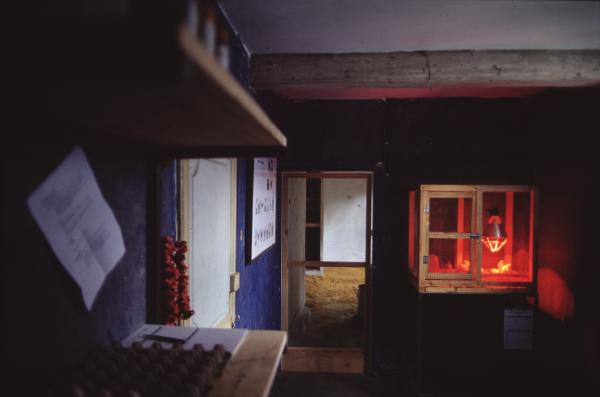